Skip to content
Press Enter / Return to begin your search.

This season I decided to go over to the dark side and get disc brakes. I did this for a few reasons but the main one was that I wore through four carbon rims in one weekend of sandy Belgian mud last year (Superprestige, Diegem and GP Sven Nys, Baal).

So, what to buy? Looking around the bikes in the pits, bikes like the Stevens Superprestige and Scott Addict are in the region of £1,500 to nearly £3,000 for the frameset alone. I was going to need two of those, plus the group sets, finishing kit and multiple sets of wheels. This is more than I’ve ever spent on a car!

I ride for a bike shop in Matlock, Derbyshire called Zepnat Cycles. They are matey with a Derbyshire based bike brand called Forme who make the aluminium ‘Calver’ cyclocross frameset. Surely I couldn’t stoop so low as to ride a metal frame? After seeing Grant Fergusson win the National Championships on one and my old friend and mentor (and also a former Ridley X-Night owner) Tim Gould letting me know the Calver really was ok, I figured maybe it would be ‘good enough’ for me. It turned out to be more than enough!

Forme were kind enough to do me a deal on a pair of frames, although there’s a limit to how much it’s possible to discount such a good value frameset (RRP £525)! I was starting to like the idea of this non-ostentatious move though. I’ve recently started coaching cyclocross and it seems more appropriate to be teaching kids while riding an affordable bike rather than sending them home thinking that you need to spend £5k on one.

Getting a bike from Zepnat is far removed from ordering one online and having to check everything and make multiple re-adjustments when it arrives. Gav Slater is a proper bike mechanic with multiple Team GB duties on his CV. There’s attention to detail everywhere. We went for the following spec:

The wheels were generously provided by Novatec. I’ve been really impressed with all the Novatec hubs I’ve had, in terms of value and serviceability, so I was delighted when they offered me wheels for the season.

I got the first bike on just before the Battle on the Beach. I had one practice lap and then straight out for the ‘Battle in the Dark’ night time-trial. The handling was superbly intuitive. Having grown up with the classic laid-back semi-tourer cyclocross geometry, I love the modern throw-round-any-corner nimble beasts that we get nowadays, and the Calver fits the bill — an absolute joy round a bit of single track at night! Special order FMB gravel tubs on the Novatec R3s can’t hurt either — yes, I know here you have to remove the “non” before ostentatious!

Disaster in the main Battle on the Beach race though! The SRAM shifter gradually gave up until I couldn’t shift at all. In their defence, SRAM were quick to replace it and it’s worked great ever since. Sorry to all the SRAM 1x deniers out there, but I’m pretty much converted to this system for ‘cross. Super simple, less to clog with mud and fewer chain drops. I’ll keep reviewing the situation but so far, so good.

Now for the unexpected bit

I’d had a nightmare end to the last ‘cross season, having a month off work and three months off the bike with sinusitis. I needed to breath some fresh air in to my riding and feel the love. So, I put some Vittoria Terreno Dry 40mm tubeless tyres on and headed out for some rides. The first was the 100 mile LA MARGE (Late Announced Mega Around Romsey Gravel Enduro). It’s nice that people go out and enjoy their sportives but this was going to be better… predominantly road for the first half, before more testing off-road ‘sectors’ appeared and finishing with the classic Test Way — Toothill finish into Southampton. Jen and I were the only entrants but this guaranteed us podium places.

This was followed by LA BARGE and LA FARGE, extra long commutes,… Any excuse to get out on my amazing new Calver (dare I say it) gravel bike. We’ve had a great summer in the UK and kicking up dust along sections of the South Downs Way has made it even better. 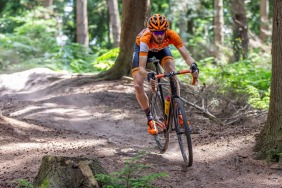 Wheel swap and a few summer ‘cross races. Feeling the love again with a win in the first one!

This bike was feeling pretty handy so why not a tyre change and try the Winchester City Centre Criterium? Another tick in a box on the Calver road bike(?) can-do list! I do have a nice Specialized S-Works I could have ridden but I felt the Calver was probably a better tool for the job.

Getting near to Three Peaks time, Novatec are kind enough to send over a set of Alpine 29er wheels, which the generous Calver clearances devour with ease. The Novatec 4in1 thru axle system means that, by changing end-caps and axles, wheels can be switched between bikes running different axles (QR, 15mm, 12mm, Shimano, SRAM XD,…) so I can juggle wheel sets around the whole family.

I decide to devise a Pre-Peaks+ course in the Auvergne to give my legs and the bike a test. The adventure bike(?) and 29er wheel set up did rather well but I could barely walk for a week afterwards. Other than the multiple rugged summits, the highlight has to be descending down into Le Lioran and emerging on a downhill track to the astonishment of the helmet and armour adorned riders queuing for the lift! 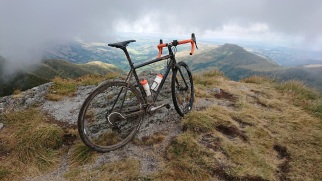 I think I’ve probably gone on long enough now about how much I love this bike! I’ll post more when I’ve run the pair for a whole muddy season but I’d be surprised if my opinion changes. Here are a few images of the new season to be going on with though:

View all posts by alexanderforrester

5 thoughts on “My modest cyclocross bikes turned out to be so much more!”