Skip to content
Press Enter / Return to begin your search.

During some recent testing in the University of Southampton’s RJ Mitchell Wind Tunnel, we decide to have a bit of fun and test out some downhill positions. With the tunnel at 47 mph, I sprinted up to speed and then adopted a range of tucks while 20 seconds of data were collected. We tried the standard on-the-drops, belly-on-saddle `Pantani position’ and then sitting in front of the saddle in the ‘Sagan position’, on-the-drops and on-the-tops. I’m calling this the Sagan position as, although I don’t know if he was the first to do it, he certainly popularised it. In last year’s Tour de France Chris Froome used it to great effect to win the stage into Bagneres-de-Luchon.

The Sagan position on-the-tops might be one of the most dangerous things you can do on a bike but, without suggesting anyone in their right minds would do this on a fast decent, we thought it would be interesting to see if it is actually faster.

At 40 mph the standard on-the-drops position requires 1.2 kW to overcome the aerodynamic drag (on, e.g. a 7% gradient, nearly 1 kW of this power would come from gravity for a rider and bike combined mass of 80 kg, i.e. 200 W is from pedalling). Switching to the Pantani position would save 350 W in power used to overcome aerodynamic drag. If the rider stops pedalling they lose 200W, so there is 150 W left to go faster, resulting in the speed increasing to over 46 mph. For the Sagan drops and tops positions, the speed increases to 49 and 50 mph, respectively.

Given a downhill pedalling power, we can actually work out a `break even’ speed for each position, i.e. the speed beyond which one would accelerate rather than slow down if you stop pedalling and adopt a lower drag position:

where subscript 1 denotes the high-drag position and 2 the low drag position, P is power, ρ air density, C_D, drag coefficient and S frontal area. The result of this equation for moving from the standard drop handlebar pedalling position to the three downhill positions tested are shown below. 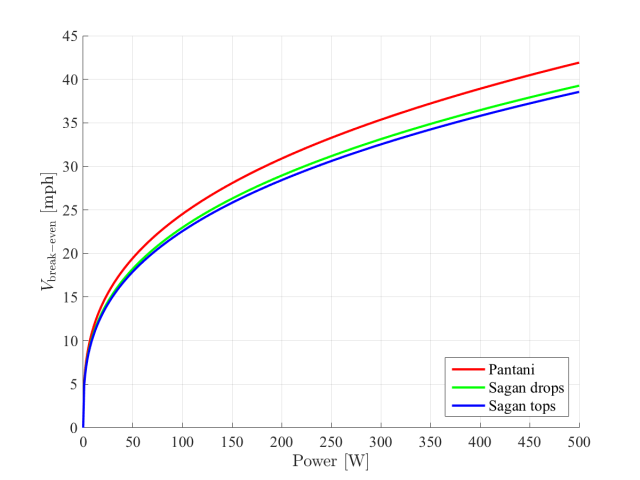 The aerodynamic advantage is clear, but make your own mind up about the safety. One of my kids past me on a descent in the Sagan position this in the summer!

The data for this post was collected as part of Michael Acuna Lesmes’ third year engineering individual project at the University of Southampton.

View all posts by alexanderforrester

3 thoughts on “Aerodynamics: the Sagan position”